Also you may pre-order what you want, including additional vendors

Click HERE and order by Thurs. night of market week for pick-up/delivery Sat

History of The Marshfield Fair

Starting in 1862 through present day, the main goals of the Marshfield Agricultural and Horticultural Society has been to educate, develop, improve and promote agriculture, horticulture, mechanical arts and all related fields. The first meeting, organized by Levi Walker and George Martin Baker, and held in 1862 during the Civil War was organized to provide a platform for residents to discuss agriculture. Called the South Marshfield Farmer’s Club, this was the beginning of what is now the Marshfield Agricultural and Horticultural Society which continues to provide such a platform through the annual Marshfield Fair held in August every year.

The first meeting of the South Marshfield Farmer’s Club consisted of 19 members and grew to 29 by 1865. They met once a week during the fall and winter. Cpt. John T. Dingley was elected president and dues were set at twenty five cents.

In the fall of 1865, a public meeting was held on the town common in front of the First Congregational Meeting House and in the Concert Hall or Conference Hall (now known as the Chapel) adjacent to it. The two hundred people attending this meeting brought and exhibited products from their farms. This gathering was such a huge success that the following year nine thousand people attended. Included in this second public meeting were oxen from both Marshfield and surrounding towns.

As a result of the huge success of the public meetings, the original founders of the South Marshfield Farmer’s Club formed a new society. In March, 1867 a charter was written and the organization was incorporated as the Marshfield Agricultural and Horticultural Society. The first meeting of the new society was held June 6, 1867 and George M. Baker was elected president. The main goals of the society continued to be the promotion of agriculture, horticulture and mechanical arts. That same year the society purchased the Wesleyan Meeting House and land (66 South River Street) which is still the society’s current location and where the Marshfield Fair is held yearly. 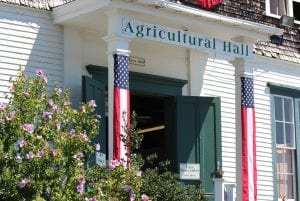 To provide an appropriate meeting place as well as a place to exhibit their products, construction began on the Exhibition Hall, now called Agricultural Hall by many of the founders including George Baker, Colonel Hiram Oakman and other men by the name of Thomas, Henry, Crosby, Chandler, Hatch, Kent Moorehead and John Baker. This three story building became and still is the centerpiece of the fairgrounds. Exhibition Hall was used not only by the society but could also be rented for fifty cents an event. Town meetings were held there for many years. The top floor had a modified basketball court which was used by the high school until 1939 when the Grace Ryder Complex was built. The basement was used for cranberry screening.

Thomas Lawson, the lumber magnet from Scituate served as president. During his tenure, many of the barns and sheds on the fairgrounds were built. Mr. Lawson was very interested in horse and sulky racing and was instrumental in building a racetrack and grandstands. At the time, the racetrack was considered one of the finest half-mile tracks in the country. Horse racing became the most popular event at the fair for a century or more first with Sulkies and then with thoroughbreds. By the end of the twentieth century, horse racing would come to an end.

Through the years the Marshfield Fair grew to include more than just agriculture and horticulture. One of the added features was motorcycle racing with the 1912 championship Merze motorcycle having been manufactured in Brockton, Ma. In the 20’s and 30’s Model A Fords were raced by many local drivers and one racing accident was featured in Ripley’s Believe It or Not. The fair in the 30’s and 40’s also featured high wire acts, stage shows, fireworks and band concerts much like today’s fairs.

Until 1946, the main exhibitors were men, but that year the Women’s Exchange was created to enable women to display and sell their crafts. The Women’s Exchange grew to include cooking and baking contests including the ever popular apple pie contest. Today, it is one of the most popular exhibits at the fair and welcomes men and women as well as children and teens.

During this time the fair continued to grow. Standard attractions included 4-H contests, agricultural and horticultural exhibits, arts and crafts displays, pulling contests and of course the ever popular motorcycle and car thrill shows. Music venues also became popular with music both during the day and into the evening. One could see roving musicians, watch magic shows, and see pigs racing as well as wood carvers, birds of prey, lumberjack shows. There was always plenty to see and do during these years. In the early years you might even get a glimpse of the local governor visiting the fair which was a tradition until 1954 and both President Calvin Coolidge and Warren G. Harding stopped by.

In the summer of 2006 the Marshfield Agricultural and Horticultural Society expanded their events to include a farmers’ market. Continuing with their goals of providing opportunities for farmers as well as to offer good quality products to the public the Farmer’s Market was created. Local farmers, gardeners, crafters and fishermen offered products for sale. Karen Biagini ran the market which was held on Friday afternoons until 2011. Lorrie Gampp Dahlen took over for Karen and has increased the market not only in vendors but also besides being open every Friday from June to September, the market is now opened one day a month during the winter season.

The Marshfield Fair is the premium summer event on the South Shore. It continues to educate the fairgoers and develop, improve and promote agriculture, horticulture, mechanical arts and all related fields through its many exhibits, lectures, demonstrations and contests. For more information on the history of the Marshfield Agricultural and Horticultural Society as well as the Marshfield Fair and to view many of the artifacts and memorabilia, stop by the our fair museum.